The most popular of the stone fruit, plums need good garden soil, slightly acid to neutral . The flowers are produced early when there is risk of frost damage so avoid frost pockets if possible or grow, fan trained, on a sunny south or west wall. Trees grown this way can easily be covered with fleece or polythene when ever frost threatens.

Plums benefit from as little pruning as possible so make sure they have the space to grow naturally with just a little formative pruning in the early years. Unlike apple and pears, never prune plums (or any other stone fruit) in the dormant winter months as infection can enter the open wounds. Small, formative pruning cuts early in life are far better than larger cuts later on.

For years St. Julian A was the main "dwarfing" rootstock for plums but this still produced quite vigorous trees- 20 ft. or more.

Pixy is a new dwarfing stock but still manages a 10 -15 ft. tree in the open. Over the last few years of testing this stock we feel it does not perform too well, especially in wetter weather

Jaspi and Plumina are two new dwarfing stocks that are just beginning to make an appearance but it is too early to evaluate them at present. Pollinators,

where needed, are given

VARIETIES TRIALLED BY US 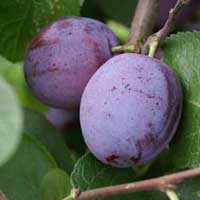 Vigorous and slow into cropping but an excellent flavoured dessert plum, 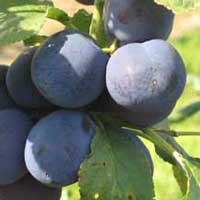 An older variety from 1874. Dark purple skin with yellow flesh. Heavy crops, self fertile and reliable. Good for eating cooking and bottling 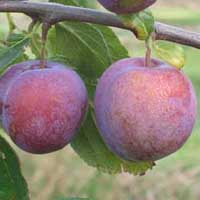 Like a large Victoria, excellent quality but shy into cropping. Vigorous so best dwarf stock. Pollinated by Victoria

New large blue plum from Germany. Late season. Partially self fertile. In my opinion, the best flavoured of any plum 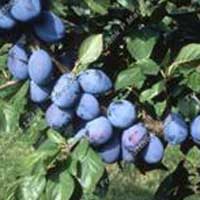 A new promising variety added to the trials garden for evaluation 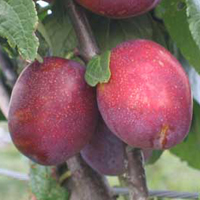 Excellent flavoured plum, a cross of Victoria and Czar with fruit similar in appearance to Victoria but larger. Strong growing, best on dwarf stock. Self fertile

Victoria is good for pollination 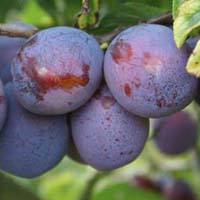 One of the last plums to pick-as late as early October here in some years.

good culinary plum and eater with sweet flesh and blue skin. Victoria and many others for pollination. Grown as a large fan on our garden wall 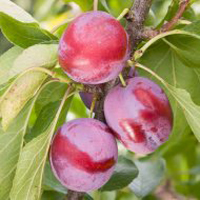 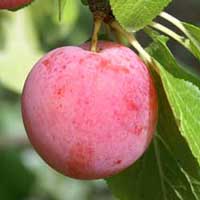 One of the best flavoured red varieties, similar if not superior to Victoria. Pollinate with Victoria. 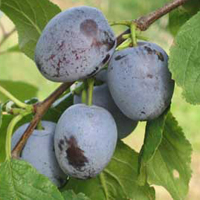 One of the best cropping early varieties with large, purple blue fruit in early August. Eating or cooking. Any of the above for pollination. Grown as a large fan on our garden wall

Picking in September, this is a large oval plum, reddish purple with yellow, sweet flesh. freestone type. New York 1937. added to the trials garden 2009 for evaluation. 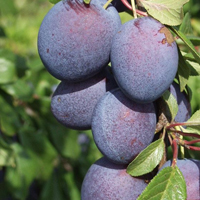 Large dual purpose fruit with greenish yellow flesh, very late in the season. To be added to the garden 2010. Any of the above for pollination. Canada 1933

The most widely planted plum to date and the most disease prone unfortunately, though it still manages to crop even when in poor condition. A freestone variety with the familiar oval red fruit. Suitable for dessert, bottling or canning. Sussex 19th century